Virtual reality is a new milestone towards better gaming experience and a big revolution for game lovers. Virtual reality is the future of video games and will be soon reformed the displaying of virtual data. VR is in its primitive stages and advancing towards its pinnacle at a fast pace. Today we will discuss about the best Android VR games. These Virtual reality games, although would not satisfy their users, as they could not provide the experiences of current video gaming technology because it is still developing but it is the technology that will ultimately survive in the virtual world.

VR space is a space combat game which you can play for only $1.99. This virtual reality space game allows you to have a combat with your enemies in the space while you are in a spaceship. In different levels, different clusters of enemies ship comes to you in various formations and you have to survive by destroying them.

This is an arcade mode game. It has fine graphics and the controls are also convenient to use. You can play this space game either in cardboard or without it by just switching on the virtual reality. The controls include a pad, which allow you to have a next level gaming experience.

Land’s End is based on the story in which you get conscious in an ancient civilization and here have to solve the puzzles. The landscapes that the game displays are the remote areas of the Earth where no people exist. The bad thing about this land’s end game is that it is a bit expensive than the vr space game, for $7.99. But the good thing about this is that, you don’t need any game pad control to play this as its developing company usTwo has created its own game controlling methods.

Need for jump VR is the first virtual reality game in our list that is free to play. It is not a really complicated and allows you to do some physical movement to play. In this game, you just need to collect coins and the game will determine your direction with the movement of your head. Check also: Top racing games

It will move into the direction in which you turn your head. You can jump by just nodding. The most awesome thing about this Need for jump VR game is that it has a multiplayer mode, and you can play it with your friends and family.

VR X-Racer is also free to play but if you want an advertisement free version, then you have to pay for it. This is quite simple in which you feel like continuously running and what you need to do is to just overcome the obstacles that come in your way. Whenever, you touch the obstacles you have a point detection. You can play this cool vr game with game pad or just activating the head sensor of the device.

Protocol zero is a great fun for people who like action games that include shooting. In this, you will be serving with the 3D fine graphics and special effects. You just have to kill the enemy and collect valuable items in the game. This is controlled by game pad and it is really fun to play. Although it is for $4.99 at the Oculus store but you can have its demo version for free.

Flats is a virtual reality shooting that you can enjoy on different Android devices. It also has TV support and a very fun FPS game to play in multiplayer mode. You will be in colorful animated world where you have to just shoot people using a gun. It does not seem to be like the graphics are very high-profile but It has justified with the game. It also allows you to save your game in the cloud so that you don’t have to start from the beginning every time you play it.

There are some games that need high physical activity and proton pulse is one of those virtual reality games. In this, you need to move your head to actively participate in the game by hitting the objects in the direction they are coming from towards you. It has pretty decent graphics yet it is something not for every VR users because not every player likes to pay for the game using their head movement.

It is a game in which you have to guide a Robot through different levels as Mekorama is a virtual reality puzzle game. Although this is pretty simple and easy at the initial level but gradually the difficulty increases for it becomes more complex to guide your robot moving the larger number of rocks to make ways for your robot. This experience of being a guide and leader will cost you $3.99.

You will be given the role of a firefly who has to move through caves and the forests to save other fireflies like him. You are being attacked by the spiders against which you can use your fire power to shoot them with. The best part of this game is that Lamper VR is a free virtual reality.

An amazing game with a freaking story line. You will be friended with Jack and Finn who were having a picnic somewhere. Later magic man comes who turn you into a balloon while jack and Finn start fighting him. Now you have to help them when the fight against the Magic man along with his minions.

The graphics are bit funky but it’s a great fun to play this Magic Man’s head game. You can have this for free from the Oculus store; therefore you don’t have to pay anything for it if you are afraid of paying for a game you think you may not like after playing.

Like Indiana Jones, be a treasure hunter of which you always being dreamed of. With this virtual reality treasure hunt, 3D is the thing does not count here because every VR game is a 3D. The question is not about the 3D but actually how good the 3D is.

By being in the abandon temples in tropical forests, you would have the experience with great reality graphics. Don’t just play it as a gamer but think of it as a dream and you are wandering on an isolated temple, searching for precious treasure.

Explore different areas of temple and see if you can get habitual of maze like corridors and pathways. But beware this is not just a temple but a deadly one. You might have to pay a big price for this treasure hunt. 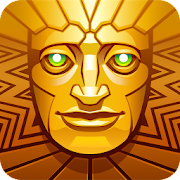 It is more like being on the movie set of “I am legend” than in a virtual reality game. Now the zombies are not just limited to the screen of your smartphone but will come really close to you. You will run across zombies while going about different places like subways and empty buildings.

Always be equipped with a weapon whenever going to open a door or entering a new place. Zombie games are really powerful genre to run chill through your spin and this virtual reality element has made it more intense. 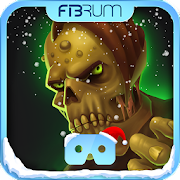