For Action loving Gamers, there is a whole new genre known as Robot games. It may include games that have more technical aspect yet full of guns, explosions, weaponry, wars and the battles. Although the genre is usually more liked by boys but has the enormous potential to entertain Gamers of all demographics. These are some of the best and high rated Android robot games.

An unbelievable robot clan game where powerful feeds on the weakest. A battle where machines are fully equipped with dangerous weapons, from guns to missiles. But the action gets to its pinnacle when you play it on the multiplayer mode. On the multiplayer mode, player can combat in 6 vs. 6 fights, where each player would have team of six deadly robots. While 1v1 player mode is also available for those who are not much into the clan fights. You can upgrade your robots and the weaponry they carry.

The parameters that determine the strength of your robot include agility, durability and powers of your robot. You can increase these qualities as you progress through the new levels. There are 24 ferocious robots that will help you to make unbeatable clan. You can choose among the 20 most destructive machines as your weapons. War robots has satisfactory level graphics and fully support all Android devices.

A hand to hand robot combat game where each one is a killing machine in itself. These built for the kill machines will fight using combos and techniques. These ultimate robots will spark blowing lights of different color, whenever they give a hard blow . There will be 35 ultra robots, you can choose anyone as your fighter and can participate in different events and leagues. There are 60 leagues you can take part in. It’s astonishing graphics will provide you with the fighting experience you never had. Iron kill has also Facebook and social network board where you can show your rank as a fighter, while enjoying multiplayer game-play with your friends.

Yes, this battle-bot game is based on Huge Jackman’s Movie Real Steel. In the movie he defeats a powerful robot with his Japanese one, using some boxing skills. If you haven’t watched the movie, even then you will learn the whole scenario by having a glimpse of it. You have to choose a Robot among 58 high Tech Robots. And have to fight against other players in the ring. The fight may be with artificial intelligence in career mode or with other online players in multiplayer mode. You can fight in global multiplayer challenges and can prove your fighting skills by ranking up your name top in the leader-board. The up-gradation of robots is also takes place, while you can have fun changing the Bot’s color.

Robot Bros Deluxe is an upgraded version of Robot Bros where you used to solve puzzles with high Tech elegant design robots. The same is the case in Robot Bros Deluxe but with deluxe, everything gets a bit better. Your robots will work together like a team to unlock some really challenging puzzle mysteries. Those who had been fan of this robot wars game, new levels are waiting for them that number in about 70. You will have a showcase of 6 cool robots each with the special trait like no one else.

While you can have many sections in a single go. Robots bros will astonish you via 3D graphics and advanced level improved game play. 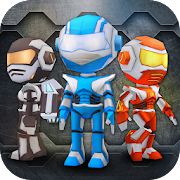 This game is all about robots fighting and punching at the perfect robot chip. The catch in the game is you are the one who has to create his fighting machine. Build a killing machine in your garage and upgrade it after every single level advancement.

Choose one of  these three, minibots, armor robots and cars fight. Try all of three and go with the one that grabs your interest most. Fight with your perfectly crafted steel art piece and let your opponents know that you are no light weight but a tough competitor. Don’t be a sitting duck in the competition and win the fights with best tactics and robot up-gradation. 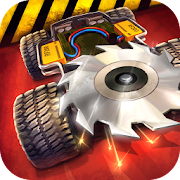